The visual evolution has started. Pioneer has announced their new flagship mixer which will set a new benchmark for DJ and VJ Mixer Technology. This is the tool professionals have been waiting for, the very first true DJ mixer that offers full audio and video mix possibilities, combined with synced effects. The Pioneer SVM-1000 is a World First with a combination of a lot of different audio and video tools :

This mixer is the ultimate tool to use with 2 Pioneer DVJ-1000's and replaced the regular audio mixer (like DJM-800) and video mixer (like Panasonic MX-50, Edirol V4 or Korg Krossfour). It's obvious that this is not a toy for home-use but a solid tool for professionals. Pioneer has developed and patented a new Multiple Video Blending Technology that can make everything happen.

All normal controls are there on the right place, just like the other mixers in the DJM-series. The real magic and power is hidden behind the 11 inch touch screen in the center area of the mixer's controls. With it and the rotary controls next to it you can control all effects and assign video parameters to EQ's.


All familiar audio effects now also have a video that resembles the audio effects. You can also use some of the extra Touch Effects, these are controlled by touching or dragging on the touch screen.

Most of the interesting stuff happens on or with the 11 inch main display. This center display is build up out of 2 sections, each dealing with different aspects. Both sections are full color touch screen LCD screens that display interactive information.

The information and buttons that are shown change when different modes are selected. As reaction time is crucial to keep all effects in sync with the audio and/or the DJ's actions the screen is designed to keep latency at a minimum and offers you a direct and instant control.


Effect & Preview Section
The top part of the screen is the interactive part, in other words, the information that is displayed will change if certain features are activated. This description is pretty rough and general but we'll launch an extended topic about all the audio and video effects in the near future when more specifications are released.

Most selection controls of the Effect Section are now done via the Touch Screen panel. Two parameter are still controlled by a rotary switch as on any other DJM: Time/Parameter and Level/Depth.

1. Choose Type of Effect
In the top left of the display you have the option to choose the effect type. The Beat Effects are familiar when you're used to work with the DJM-800. These effects are BPM synced with the audio that's currently playing at the selected section/channel.

The Touch Effects all have a parameter that is controlled by touching or dragging on the Touch Area (5).

With Text Effects you can show some text over your video output. There are 6 movement patterns to choose from.

 2. Select and Assign Channel
At the right next to the screen there are some rotary controls that are used to assign the effect to a certain channel. The rotary on the right of the screen is used to switch the section to which you apply effects.

 4. Choose Audio, Video or Both
The effects can be applied to only the audio or only the video without interfering with the other. This way you can go nuts with the video, without effecting the audio. Off course AV means that the effects are applied to both the audio AND video of the channel.

 5. Touch & Preview Area
This area shows a preview of the master and the effects so you'll be able to see what is outputted on the Master Output of the SVM-1000. You also use this section to apply the Touch Effects.


Beat Effects
Just like on the other mixers in Pioneer's DJM-series the SVM1000 also has a load of effects included. All switchable settings are now controlled via the Touch Screen. Just press on any of the icons on the screen and instantly the SVM follows your command.

All effects are synced with the build in BPM counter. This accurate BPM counter constantly measures the BPM of the selected channel. Instead of beat < and > buttons as on the DJM-800, the SVM-1000 has the same beat controls (6) as an EFX-1000. For example you can directly skip from 1/2 to 1/1 beat (so skipping the 3/4) by just pressing at the screen.

In the Effect Selection area (3) you can choose any of Beat Effects, the 12 Beat Effects are shown as red selection boxes. All these audio effects now also have a linked video effect to it, so when you hear and Echo, you also see an Echo.


Touch Effects
When this Effect Type is selected (3) you can use any of the Touch Effect. These effects are more based around the visual aspect. All of these effects also generate an audio effect as well. The control of the the parameter is done by using the Touch Area (5) of the display. The SVM-1000 also has the possibility to store some of these 'moves' and repeat them, synced to the audio.


Text Effects
Linked to the tempo of your tracks, the SVM-1000 is also capable of displaying text messages. All movements and effects are synced to the audio. Text can be inputted via the touch screen's build in keyboard or via an external USB keyboard. You can store all entered texts for later use on SD memory card so you don't need to retype them each time.

Visualizer
When you need visuals but you're playing audio only you can activate the visualizer for a channel. The visualizer generates 60 visual patterns to choose from. All Touch and Beat Effects have a Visualizer Mode, the Beat effects can be applied on 4 different ways (Original/Inverse/Edge/Hue). You need to activate the Visualizer with the Effect On/Off button, just like any of the effects you want to apply.


Cross Fader & Video Transition Section
The bottom part of the display shows you the preview of all video inputs. The four preview squares resemble the video inputs that are selected on the 4 channels. The preview appears as soon as video input is detected. Although the previews are small in most cases it gives a good speculation of what is underneath the fader.

Just below that you can select the type of transition that will be applied to the video mix as you would move the Cross Fader. You can also perform a video transition if you use the Touch Screen to drag the fader knob to any of the sides.

Most of the transition effects are very common and straight forward :

 Fade: smooth mix from input A to input B
 Wipe: wipes of input A and slides in input B
 Switch: instantly swap inputs
 Chroma and Luminance mixing of inputs

By using and SD card or USB memory device you can load JPEG image in the Still Image Sampler. You can store a maximum of 8 images in the memory to use at the same time. It is possible to use Video Effect to the images to enhance the show. This is a good way to promote event (with a flyer) or sponsors with their logo.

You can also connect a USB keyboard to the USB socket on the top left of the SVM-1000. In the text input area's you can then easily enter the texts.

There is a wide variety of inputs you can use. In total the SVM-1000 has 10 audio inputs and 14 video input (+2 microphone inputs). The inputs are all clearly marked at the Video Input selector.
Channel 1 and Channel 4 have an extra Video EX setting. These inputs are located at the top panel in the left upper corner. These composite inputs can be used to make a quick connection in unsuspected situations.


Video Trim
With the Video Trim you can adjust the brightness of the video input, which basically functions the same way as the Audio Trim does.


Audio Input Selector
Just as with a normal DJ Mixer this switch can be set to assign the right input to your channel. For each channel you can select from 2 or 3 audio inputs.

The Gain Trim has a range from infinite (silent) to +9db. The most optimal setting of the Trim is around 12 O'clock (0dB).


Video Equalizer
You can link the audio equalizers with a video parameter that will be applied to that channel on top of the normal equalizer.

In the Video EQ menu you can choose which of the video parameters you want to link to which knob of the EQ. You can adjust the R, G or B value or the Contrast, Hue or saturation. You can link any of these parameters to one of the Hi- Mid- Low-knobs. This setting is for all channels the same.

Both microphones share the EQ (equalizer) settings. You have a little bit of control over the sound adjustments for the Microphone inputs with these two knobs.


Microphone Switch
Turn the microphone on and off with this switch. When switched on the red LED will illuminate. When the Talk over mode is selected all audio levels will be decreased in volume by about -20dB so the microphone signal is clearly understandable.


Assign Cross Fader
Each channel can be assigned to any side of the cross fader Simply put the switch to the left or right to activate the Cross Fader.


And off course there are these obvious controls available :

 Audio Master Rotary
Instead of a fader, the Pioneer SVM-1000 has a rotary control for the master level. This will prevent you from making accidental mistakes due to your sleeves or other miss-grabbing.

 Video Master Rotary
Fade the Master Output to white or black by rotating this knob left or right.

 Balance
Sets the positions of the sound from left to right, when centered you feel a click.

 Booth Monitor
Control the Monitor Output for your monitor speakers.

OK we understand you don't like ads (so don't we) but,
Please consider making this website possible by disabling your Ad Blocker.
Or become a Gold Member, they don't see ads. 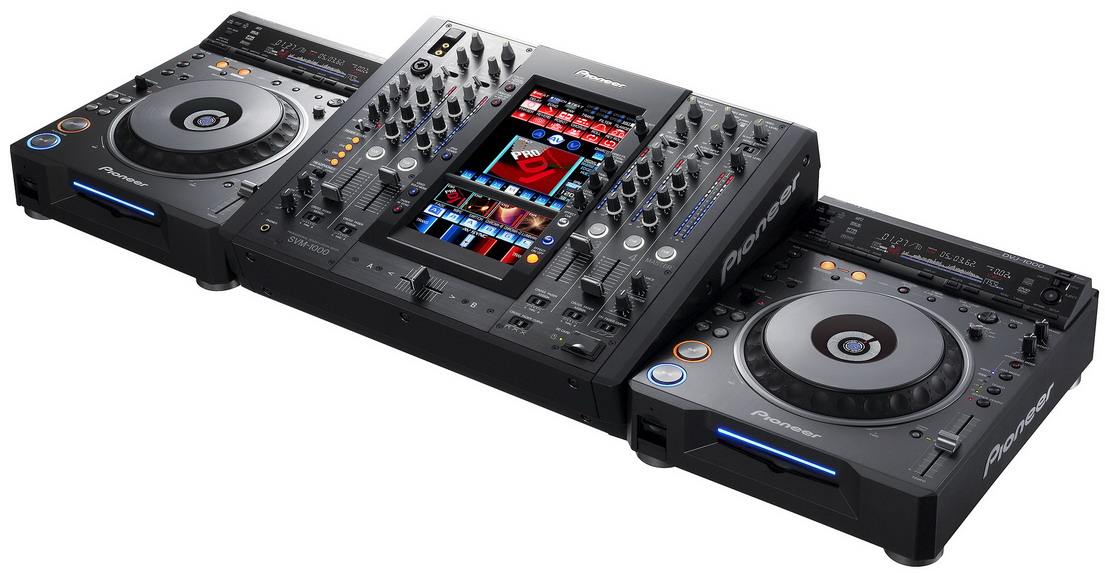 help? help? help
OK we understand you don't like ads (so don't we) but,
Please consider making this website possible by disabling your Ad Blocker.
Or become a Gold Member, they don't see ads.
Create your FREE ACCOUNT now !


Create your account to get involved with the Community